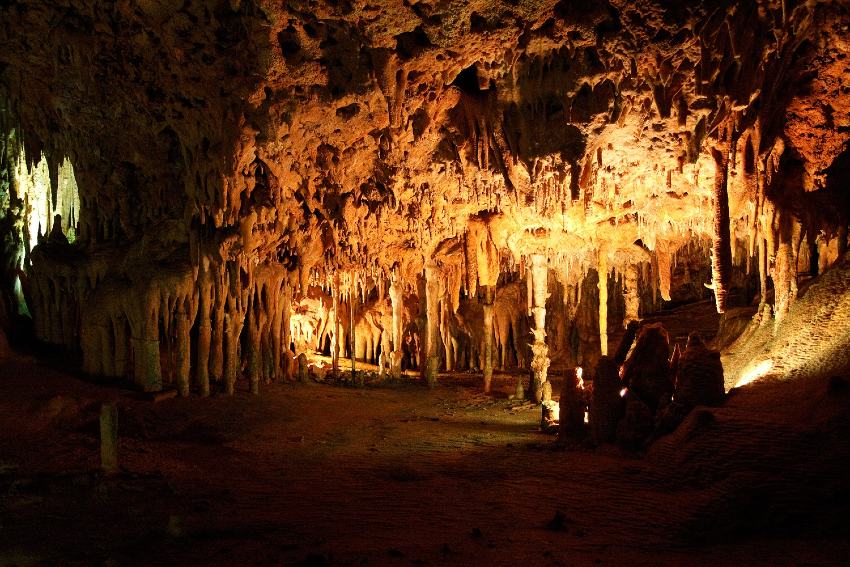 Are you looking for a unique experience on your holiday in Mallorca? Well, Hotels VIVA would like to invite you to discover the famous Coves dels Hams (Fishhook Caves). You’ll feel like an adventurer as you travel into the depths of the earth and marvel at nature's creations! In all Mallorcan caves, you’ll find both wonderful landscapes and a fascinating history.

Of all the magical places to be found on the island, the Mallorcan caves are among the most visited because of their impressive designs. Out of all of them, Les Coves dels Hams are particularly rare and have a rather curious history.

Located in the village of Porto Cristo, Les Coves dels Hams are more than 10 million years old, but their beauty was only discovered in 1905 by a speleologist by the name of Don Pedro Caldentey. Since then, they have become a major attraction for tourists from all over the world.

These enormous caves are subdivided, creating an enormous underground labyrinth. In the Coves dels Hams, we can find the Round Cave, the Blue Cave (the newest one opened in 2015), and the Classical Cave, which has 12 galleries to explore. And, as if that weren’t enough, there are several underground lakes inside some of the caves, a true work of art that nature has gifted us with.

Are you a nature lover? Well, the Round Cave is the perfect introduction to the impressive Coves dels Hams. This cave has an open, green area which conceals a spectacular botanical garden full of native flora and fauna.

Thanks to its own special microclimate, which has a lower temperature than the outside of the cave, this part of the Coves dels Hams has a varied vegetation and a very special ecosystem with several different types of animals and insects. You’ll even see many species of birds flying freely inside the cave. According to different reviews of these caves in Mallorca, it’s one of the best places to take pictures, because of the contrast between its botanical garden and rocky walls.

On leaving the Round Cave, you’ll come to the Blue Cave, opened to the public in 2015. This is the newest attraction at the Coves dels Hams, and features a beautiful display on the history of Mallorca. There’s an audiovisual show that tells us all about the story of the caves, their discoverers, and even their creation, all through projections on the rocky surface of the natural walls.

Thanks to the special lighting and the attractive coloured LED lights that illuminate the innumerable stalactites, the resulting play of light and shadows projected on the stone formations creates a truly incredible spectacle. Some of its most impressive rooms go by such names as Samson's Columns, Plains of Fra Mauro and The Pit of Hell.

Made up of no fewer than 12 different galleries, the Classical Cave, or Main Cave, is the core of this whole rocky underground system. As the temperature rises, if you let your imagination run wild, you’ll be able to see the outlines of animals and other shapes "drawn" onto the rocks. Some of these formations even have their own names, such as Castle or Two Columns. This cave owes its name to the fact that classical music performances are often held in one of its chambers.

And, as if all this weren’t enough, in one of the chambers of the Les Coves dels Hams we can find the so-called "Sea of Venice", an immense underground lake. In fact, it’s actually the largest underground lake ever found in a cave system, which makes it perfect for all kinds of musical shows.

This lake, besides being one of the several underground lakes in the caves, is where you can see an acoustic show called "Magical Mozart", in honour of the famous classical music composer. It’s a unique experience for classical music lovers, and for everyone really!

If you would like to visit Les Coves dels Hams, one of the best caves in Mallorca, then we recommend that you either go in your rental car, as the caves have free parking, or take a bus from one of the nearby villages.

As for the entrance fees to the caves, each ticket costs between €18 and €40 depending on the type of visit you choose. You can opt for a guide, special events such as concerts, and also access to the lakes. Currently, due to pandemic restrictions, Les Coves dels Hams are only open at the weekend or on public holidays, from 11:00 to 14:30.

And, as we close this article, we would like to tell you about the origin of the name of the caves. The stalactites in the caves descend from the ceiling and then arch inwards, creating a hook shape, which is the word "ham" in Catalan. When you come to the island, remember to include a visit to this wonder of nature as you plan out your days!

Mallorca has some of the most amazing...

If you’re an adrenaline and speed junkie, then...

Are you looking for a unique experience on...

With the imminent reopening of tourism, and...

If we’re talking about beautiful places in...