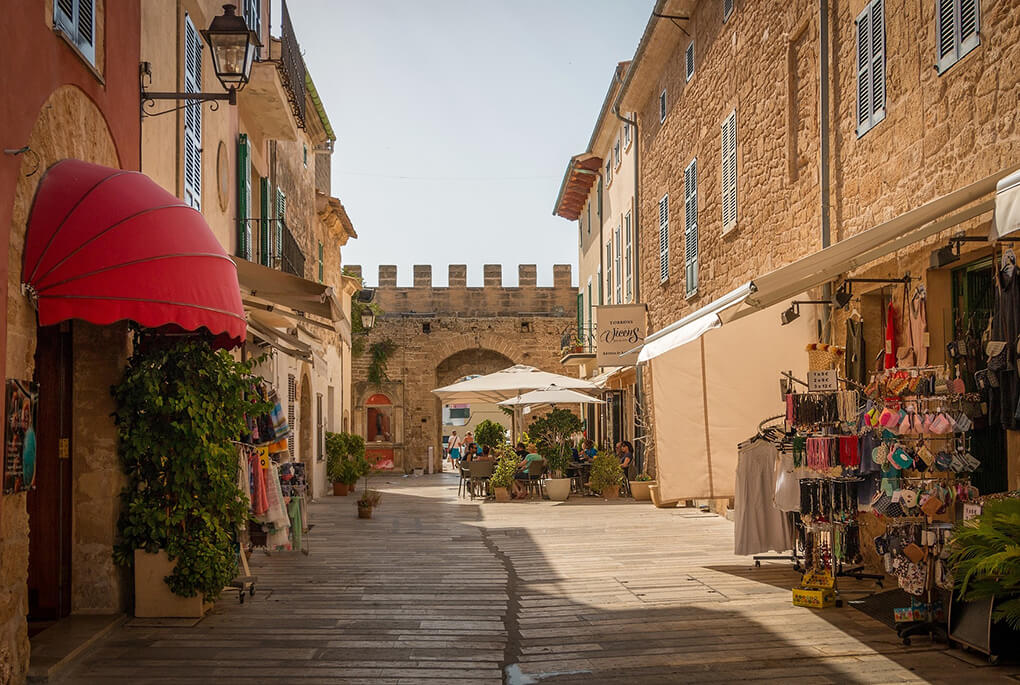 Journey back in time to enjoy exploring Alcudia’s old town

Alcudia is a major tourist centre in the northeast of the island of Majorca in the Balearic Archipelago. Although the area is famous for its extensive beaches, including the Playa de Muro, S'Albufera natural park, and other well-known tourist attractions, the village of Alcúdia, set further inland from the Port d'Alcudia, also boasts a well-preserved old town, offering you the rare opportunity to travel back in time.

Taking a stroll round the Old Town

Alcudia’s old town is surrounded by 14th-century walls that are largely intact, allowing you to walk almost all the way around the town to catch a glimpse of dwellings, some dating from the 13th century, its narrow, cobbled streets, the medieval ramparts and towers, and spectacular views. What’s more, Alcudia’s picturesque old town is completely pedestrianised, so you’ll be able to stroll to your heart’s content among the many delights this charming town has to offer.

What’s in a name

First settled in the Bronze Age, Alcudia was conquered by the Romans around the year 100 B.C. Tourists can still see remains of the ancient Roman City of Pollentia, which include a Roman amphitheatre, just outside the town’s medieval walls.

After the fall of Rome, many inhabitants moved to a safer location further inland, modern day Pollença. After numerous invasions, the town was later conquered by the Moors and given the name Alcudia, which is Arabic for “the town on the hill”. The Moors were eventually defeated by King Jaume I, and his successor Jaume II founded the new town and its early 14th-century neo-Gothic church. But it was not until the 18th century that the town was given a port and really began to thrive.

During the early 19th century, Catalan refugees fled to the island to escape the Napoleonic Wars, and the second half of the century saw an increase in economic activity leading, in 1875, to the island’s first railway. Tourists began to flock to the Balearic Islands in the early 20th century and since then, Alcúdia has never looked back.

Although the town attracts tourists all year round, summer is the ideal time to visit Alcudia’s old town, especially as the festival of St. Jaume falls in July. This week-long festival celebrating Alcúdia’s patron saint covers a wide variety of entertainment which includes concerts, theatre, exhibitions, religious ceremonies, and firework displays.

Dramatised tours and theatre productions are also available to book throughout the summer, giving tourists a real feel of life in the Middle Ages. Owing to its rich history, which spans the ages, you’ll get the change to travel from century to century sampling the town’s wealth of cultural heritage.

This evidently includes the town’s culinary delights which can be enjoyed in Alcudia’s many premium restaurants and cafes. To add to your enjoyment the open-air market takes place twice a week on Tuesdays and Sundays offering a wide range of fresh and artisanal products, including the island’s famous ensaimada.

To get the most out of your visit, Hotels VIVA recommend Alcudia’s Tourist Information Office is conveniently located close to many of the old town’s most important attractions. Staff will be more than happy to give you advice to make sure you enjoy your stay. The town of Alcudia is easily accessible from the Port d’Alcúdia by public transport or, if you’re feeling energetic and take the necessary precautions with the heat, on foot!

Mallorca is just the right size to easily get...

Let’s be honest: we all love going on...

There are some things that people tend not to...