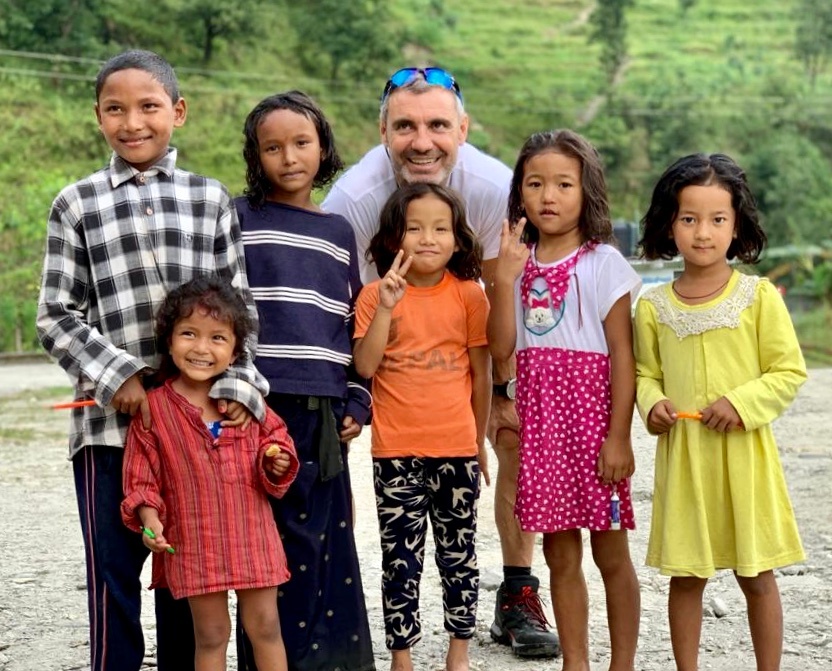 The world fits into a crayon

Travelling opens your mind and your heart. Going away from what is familiar to you turns your daily life into an ongoing surprise. Our traveller goes through valleys and winding paths which take him away from the Western civilization and throw him into an unknown and modest rural world.

Children make him realise the value of the crayons he carries with him as a present for them. Smiles and kids surround him. Distances fade away if you approach them with your heart in your hands.

It is said the world has become smaller as anybody can get to any part of the globe in a relatively short amount of time. Speed is the sign of our times and it makes us confused. Getting to the Nar-Phu Valley, close to the border between Nepal and Tibet, takes an eight-hour-drive from Kathmandu because the road is way too busy. These barely 200 km are difficult to forget. When you arrive in Besisahar, you stop at a piece of waste ground with three shacks as restaurants. There you get on special sturdy and powerful 4X4s, but a lot narrower than the ones we are used to in Europe. The reason for this is not that Nepalis are a rather short people, but the fact that cars cannot be driven on the paths carved in the mountain. The slope is on one side and an abyss which falls to the river is on the other side. If two cars meet on the same road, one has either to fit the two cars on the path or reverse. We spent two days challenging the hard suspension of the jeep as well as our own lower backs and necks.

When you can no longer use a four-wheel vehicle, everything stops. Life goes by more slowly and the sense of loneliness grows bigger with each step you take. The human being starts to lose control of space and time escapes from the command of technology. Goodbye to crowds. If you get rid of the comfort of modern means of transport, the world is still huge and immeasurable. It will take us an extra four-day walk to reach Himlung Himal base camp.

Walking takes us back to the human dimension and gets us closer to people. Children are the purest of all beings. They are the ones who, defenseless, come closer to the walker. The little ones who live in the Himalayan rural areas make you forget the reason you had to reach the Himalayas with their broad and permanent smiles.

Mountains become secondary when a three-year-old girl grabs your little finger while she looks at your photos on your mobile. Seconds later, she has already taken possession of your hand and climbs up your lap to carry on with the joke festival. Five crayons have the power to put on smiles in five happy and grateful faces. Even if it is hard to believe, such modest places still exist in the world.