Who has never had doubts? Who has never thought about running away? Throwing the towel is an option or, is it not? Our mountaineer suffers the consequences of mental and physical exhaustion, the consequences of climbing HImlung Himal. Will he surrender? It´s colder every day and he feels weaker and weaker, but there is a trigger which works for him: his passion. And the memory of his warm Majorca. That makes him smile and understand that throwing the towel is not an option.

If you haven’t put on your sleeping mask, dawn’s first light gets into the tent and wakes you up. It’s the coldest hour. You toss and turn into your sleeping bag looking for the heat which escapes from your body the same way steam evaporates from boiling water. It is very hard to get back to sleep and all you want is the new day to begin so you can have a hot cup of tea. It takes your body some days, even some weeks to get acclimatised to altitude which basically implies the production of enough red cells to make up for the lack of oxygen. That is why we need to keep getting to the altitude camps and when the summit is closer, getting back down to the base camp for our bodies to assimilate those changes. It is hard to get away from your objective even if you know it is necessary to do so. I have never had such clear metaphor of the saying “two steps forward, one step back.”

While you get acclimatized, your body gets tired. Your metabolism is faster to fight the cold and it is harder to eat and rest properly. We are losing weight and getting weaker progressively. One is aware of this and feels anxious to reach the summit as soon as possible. This is another factor to control.

The first time we walked through the glacier to reach Camp 1 was the easiest. We climbed up and down on the same day to leave part of the climbing material there. After two nights having a rest in base camp, we came back up to spend the night in Camp 1, and then in Camp 2, over 6,000 metres high already. 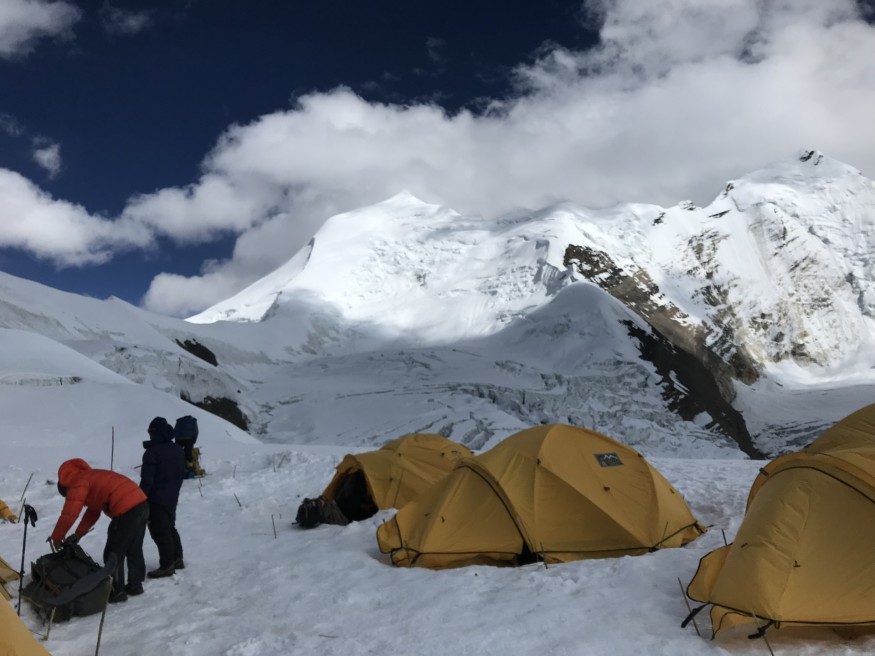 There are 18 degrees below zero inside the tents tonight, the wind is roaring and doesn´t let us sleep for more than five minutes in a row. This is the time when the first doubts appear. Will this be enough preparation? Will we have enough material? Is Himlung a reasonable goal for me?

I’m looking at the frozen ceiling of my tent. It is pure white. As if flakes were laughing at gravity and it was snowing upwards. I close my eyes and I feel the intense cold in my lids, the only uncovered part of my body. And then I think that doubt is inherent to our lives up here, so close to the sky or at sea level. Only fanatics do not hesitate, and they don’t have a sense of humour, either. So, I smile and remember the warmth of paradise in the shape of a Majorcan beach and I let my passion for the Himalayan beauty, which will return at dawn, drown the doubts little by little. I fall sleep for five more minutes.