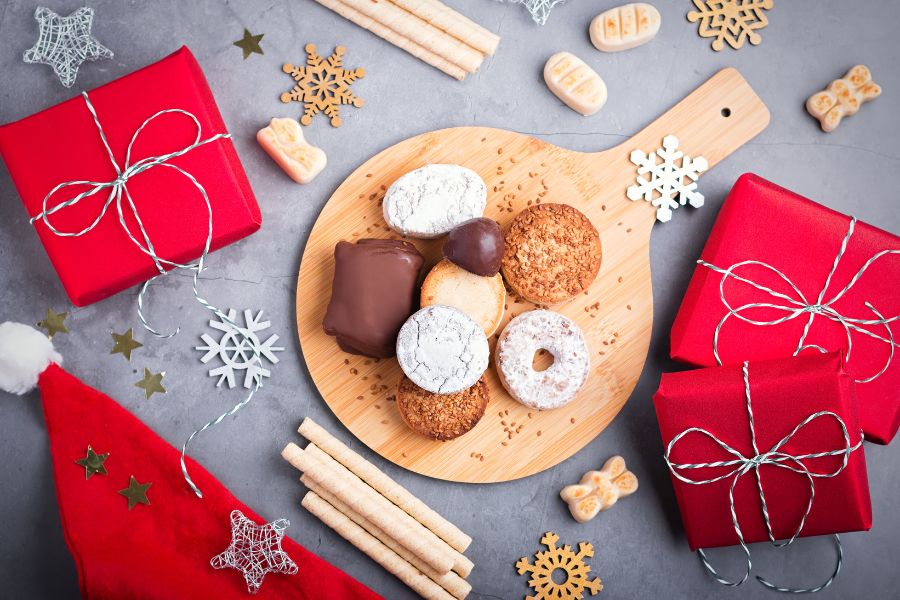 Christmas is a time of celebration and festive gatherings in which sweet treats play a starring role.

Nougat, polvorones, marzipan, Roscón de Reyes... Not one of these sweets will be missing during these festive days when enjoying great food with friends, family, or work colleagues is the perfect excuse to forget about the scales.

Other typical Christmas desserts and sweets you can enjoy both in Spain and in other European countries include:

One of the most popular Christmas sweets and a must after a Christmas lunch or dinner. They can be translated as "wine donuts", because of their doughnut-like shape and intense, aniseed-flavoured taste.

There are many recipes for homemade roscones de vino. They all contain sweet wine, nuts, and spices such as aniseed and sesame seeds.

In addition, these roscones are covered with icing sugar to give them their distinctive and characteristic snowy appearance.

Even though they're eaten all year round, sales of mantecados soar when the Christmas season approaches.

These sweets originate from Andalusia, but are eaten all over Spain, where they're made using traditional methods.

The mantecados of Antequera and Estepona are particularly famous, although other leading exporting towns are Portillo and Tordesillas (Valladolid) and Rute (Toledo).

What can we say about this typical Christmas sweet? It can be found in different formats and flavours, the most popular being the almond, lemon, and chocolate mantecados.

This type of yule log is becoming one of the most popular Christmas desserts.

Of French origin (its original name is "bûche de Nöel"), it's quite simple to make. It consists of a rolled sponge cake, which is filled with cream, chocolate, truffle, mousse, nougat cream or whipped cream.

The sponge cake is covered with chocolate and finished with different toppings to achieve the most creative and tasty finishes.

Panettone is a very spongy, sweet pastry that can be filled with sultanas, chocolate chips or candied fruit.

It's a typical sweet in Italy at Christmas, and the panettones of Milan and the north of the peninsula are especially famous, although it has also been successfully exported all over Europe.

In our country, more and more families are putting panettone on their Christmas table. And not only after lunch or dinner, but also at breakfast or snack time.

Indeed, it's very common to cut the panettone into slices and serve it with hot chocolate.

Mallorcan pastries are very well known and, at special times of the year such as Christmas, the shop windows of its bakeries are especially eye-catching and tempting.

Two of the typical Mallorcan Christmas desserts are "Pa moixó" and "peix".

The former is a chocolate and coconut cake originally from the town of Sóller; the latter is a marzipan cake with several layers of almonds, orange or plum marmalade, sponge cake soaked in sour wine, egg yolk and chocolate, and shaped like a fish (hence its name in Mallorcan).

Another of the most famous Christmas desserts in Mallorca are the quemullars, a name that encompasses several typical pastries that can be filled or dipped in hot chocolate.

The best-known quemullars are the coca bamba (very similar to the legendary potato cakes of Valldemossa, but rolled and flaky as if it were an ensaimada), and the coca de torró.

The latter is usually served as a typical Christmas sweet and is made with orange juice, sugar, cinnamon, and ground almonds.

The combination of these ingredients, in the form of a thick paste, is served as a filling between two wafers.