Our Mallorcan island is truly unique, and this is summed up in places as special as the Almudaina Royal Palace. Here at Hotels VIVA, we don't want you to miss out on each and every one of the delightful treasures hidden away in the island’s towns and villages – you’ll be lost for words! Not to mention its impressive must-see monuments.

Today, we’d like to tell you a little more about the palace’s extraordinary interior. Its exquisite decoration and furnishings evoke an authentic palatial atmosphere that will make you feel as if you’ve travelled back in time.

The Almudaina Royal Palace has a great location – right next to Palma Cathedral, one of the most impressive enclaves in the old town.

To get to see the interior of the palace, you can opt for a free visit, which lasts approximately 40 minutes, or a guided tour, which you can pre-arrange online. However, the Almudaina Royal Palace doesn’t currently offer audio guides or brochures to the public due to COVID regulations. As an alternative though, you can always download the apps pertaining to the different monuments.

Without a doubt, the palace is a must-see on your next trip to the island. It closes at 19:00 hours, but the last entry through the ticket office is one hour earlier.

If you visit Mallorca between April and September, you can enjoy the Almudaina Royal Palace free of charge twice a week: on Wednesdays and Sundays from 15:00 to 17:55.

However, it’s always advisable to confirm the opening times before visiting, as due to the current pandemic, public holidays, or certain official events, there may be changes or restrictions for visitors.

If you’d like any more practical information about buying tickets, prices, COVID conditions, opening times, or how to get there, then you can consult the National Heritage website.

The hidden secrets of the Almudaina Royal Palace 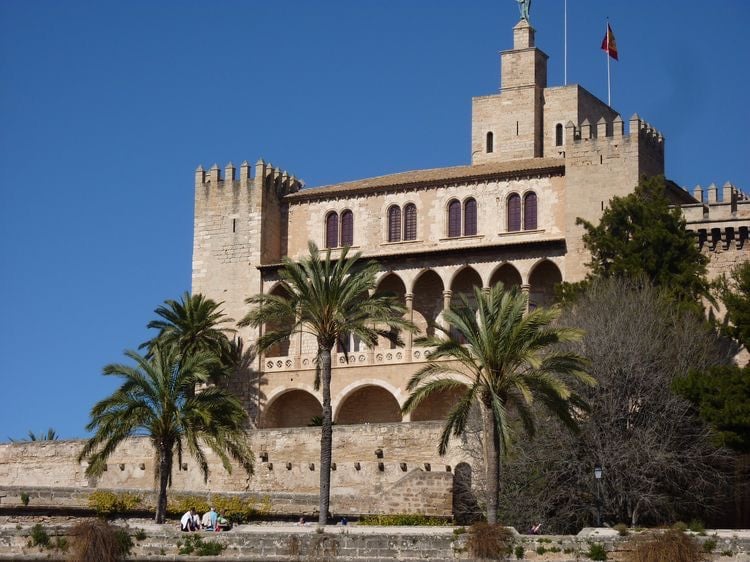 Now that you know all about the practical aspects of the Palace in readiness for your next visit to the island, we’re now going to let you in on some of its best secrets.

The different civilisations that have occupied the island throughout history have left their mark on the Almudaina Royal Palace, and they all created different areas in accordance with their needs and tastes.

The first version of the present-day Almudaina Royal Palace - which was Muslim in style -  took shape around 1281 and was later modified by King Jaume II, who gave it the form it retains today.

Its spectacular halls (and much more)

The tour begins in the Salón de Chimeneas, whose name comes from its enormous triple fireplace, which, in its day, was the heating system of the great Salón Mayor (Main Hall). This room (also known as the Gothic Room) is the most important room on the tour. It’s used for official royal receptions for kings and for celebrating important occasions and festivities.

After the Salón de Chimeneas, we come to the Salón de Reyes (Hall of Kings), where you can see portraits of the island's monarchs, as well as a replica of the helmet of Jaume I with its unique dragon shape. Next up, the Salón de Conejos (Rabbit Hall) will surprise you with its size, as it’s one of the largest rooms on the tour.

At this point, just before going up to the top floor, there’s a unique opportunity to contemplate the magnificent views of the bay of Palma and the medieval garden of S'Hort del Rei, from one of the terraces.

The Arab Baths are another of the palace's best-kept secrets, which were once the private baths of the monarchs and which, despite their small size, will still impress you.

To access the first floor, you have to go out through the Patio de Armas or Patio de Honor, where there’s an unusual fountain with a white marble lion, with a certain Muslim feel to it, and somewhat reminiscent of the Patio de los Leones in the Alhambra Palace in Granada.

Finally, you can visit the chapel of Santa Ana, which houses the relics of Santa Práxedes, brought from Rome by Jaime III.

The Changing of the Palace Guard of Honour

For the last twelve years, this event, carried out by soldiers from the Palma 47 Light Infantry Regiment, has taken place on the last Saturday of every month at noon in front of the Palace. However, as a result of COVID-19, it has been suspended to avoid overcrowding.

During the event, the soldiers wear period uniforms reminiscent of the Changing of the Palace Guard of times gone by, when the viceroys of Mallorca resided there. These uniforms are reproductions of those worn by the Spanish infantry under Charles III.

As you’ll have seen, Mallorca has a fascinating historical background and is home to some impressive monuments, and this, together with its gastronomy and landscapes, make the island a great place to visit at any time of the year.

Are you looking for hotels in Mallorca with...

Are you looking to turn your holiday into a...

Are you getting ready for your next trip? After...

Mallorca is one of the most popular family...

Mallorca is an ideal destination for a family...