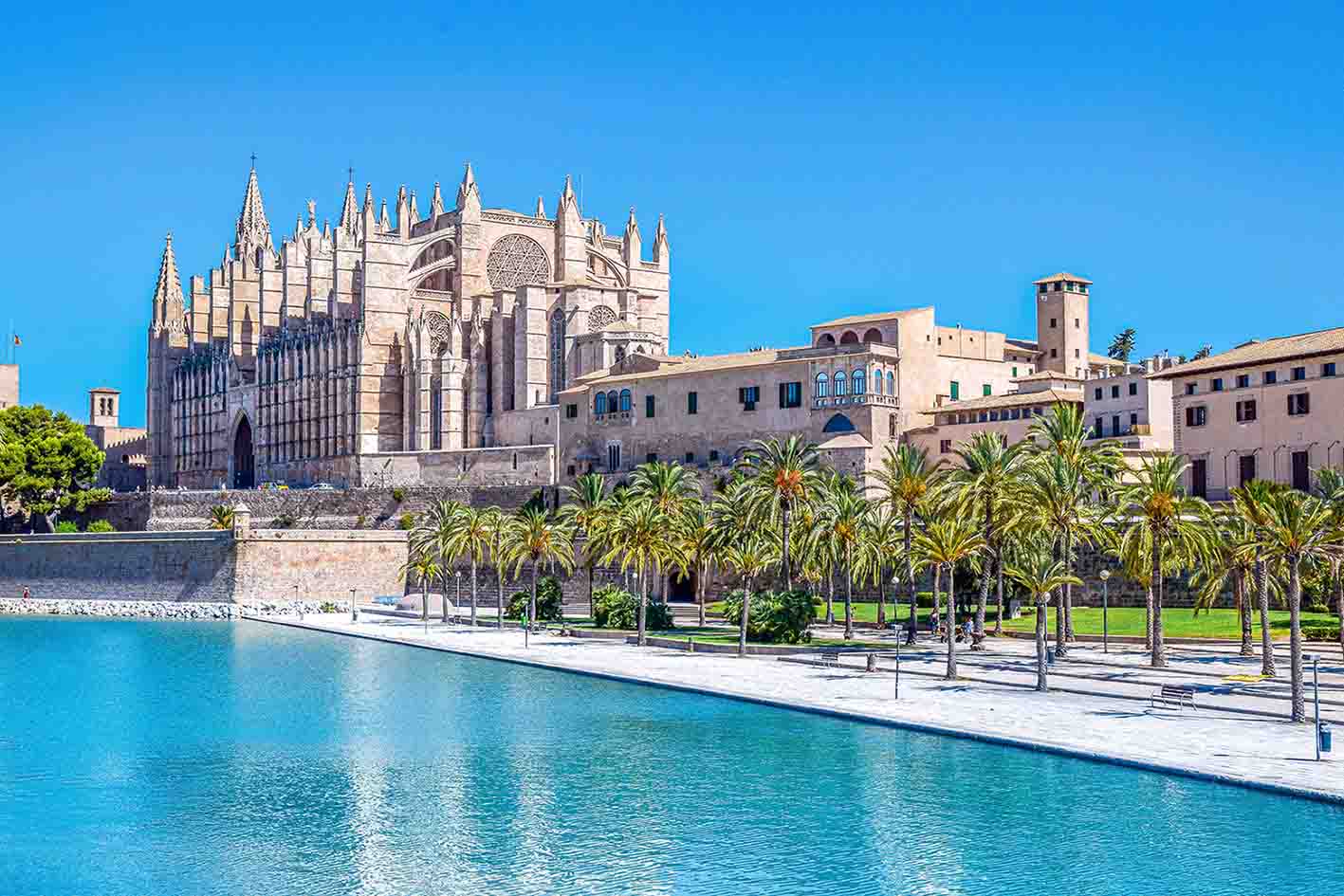 Do you know the history of Palma Cathedral?

Palma Cathedral is one of the most spectacular works of Gothic architecture in Spain. Located right by the sea, Palma Cathedral, popularly called La Seu, was declared a Historic-Artistic Monument, and, behind its walls, we learn about the history of the island.

So, are you familiar with the history of Palma Cathedral? Its construction began in 1229 and finished in 1601, 372 years in total. This Mallorcan cathedral was built on the foundations of an ancient mosque and the Roman walls that protected the city.

According to legend, King Jaume I made a promise to the Virgin Mary on the high seas when his ship was shipwrecked on its way to conquer Mallorca, and, since then, it was dedicated to her and goes by the name of the Cathedral of Santa Maria, which is a symbol of the strong relationship between the Church and the aristocratic family of Aragon. Here at Hotels VIVA, we’d like to tell you more about the history of the Palma Cathedral and its architectural peculiarities.

A brief history of Palma Cathedral

Bishop Pere de Morella was the man who started Palma Cathedral’s story, consecrating the main altar and initiating the construction under the orders of King Jaume II.

In the mid-13th century, construction began on the Trinity Chapel, which was to be the mausoleum of several monarchs of the Mallorcan royal family.

In the 15th century, the construction of the bell tower was completed, which consists of 9 bells, each with their own name: N'Eloi, Na Bàrbara, N'Antònia, Sa Nova, Na Mitja, Na Tèrcia, Na Matines, Na Prima and Na Picarol. N'Eloi is the largest of them all and weighs around 4,500 kilos.

The Mirador and Almoina doorways were also added during this period, and, in the 16th century, construction began on the choir area located in the centre of the main nave.

The 17th and 18th centuries were very important for the history of Palma Cathedral, as, during this period, the post-Tridentine spirituality was accentuated and the interior of the cathedral began to be filled with iconic works of art, such as the Corpus Christi altarpiece.

During the 20th and 21st centuries, Palma Cathedral had artistic interventions by very important personalities in the field. Between 1904 and 1915, Antoni Gaudí renovated the interior of the church, giving relevance and visibility to the presbytery, opening up space for the faithful and opening the stained glass windows that are an emblem of the Cathedral today.

The most recent intervention in the history of Palma Cathedral was carried out by the artist Miquel Barceló, who, in 2007, designed and created a ceramic mural for the Chapel of the Blessed Sacrament. His work refers to the biblical passage of the distribution of fish and loaves of bread, and the realism in the mural makes it a truly exquisite piece of art.

The peculiarities of Palma Cathedral

We have already told you that it’s a spectacular cathedral, but it also has some peculiarities that make it very special.

The cathedral boasts a unique view of Palma. From Monday to Saturday, the church organises guided tours to the bell tower and the cathedral terrace, which offers an incredible panoramic view of the island.

La Seu has the largest organ of all the churches on Mallorca. Dating from 1328, it has four 56-note keyboards and a 30-note pedal. The construction of this organ gave rise to the school of organ builders, which has become one of the most important schools in the world and, since the year 2000, the International Organ Festival has been held there.

The Cathedral of Mallorca has its own museum, which is located in the Plaça de la Seu. You enter it through the bell tower and in its three rooms you can learn about the vast history of Palma Cathedral and the island.

Palma Cathedral has the largest rose window in the world out of all the cathedrals of this style. The “Eye of the Gothic”, as it has become known, measures 13 metres in diameter and has 1,236 sheets of glass that create a wonderful display of colors. Its imposing beauty is best appreciated when the sun shines through the stained glass, providing a truly beautiful spectacle.

A building brimming with culture, architecture and art… the history of Palma Cathedral is impressive, to say the least! Without a doubt, La Seu is a must-see on your next visit to the island, and you're sure to love it.

Are you looking for hotels in Mallorca with...

Are you looking to turn your holiday into a...

Are you getting ready for your next trip? After...

Mallorca is one of the most popular family...

Mallorca is an ideal destination for a family...